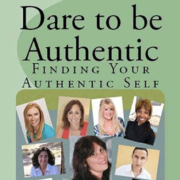 It was late in the year of 2013, and I was about halfway through my second life coaching certification.  It was a year-long, interactive online course that emphasized the Law of Attraction, and I was really enjoying it.  I talked in groups with other coaches and followed suggestions that included setting up LinkedIn to connect with more professionals.

I was scrolling through the profiles and one of them caught my eye.  It was a Life Coach who had an online radio show.  She was showcasing one of her past guests. The subject matter was interesting, so I messaged her.  I introduced myself and asked if I could still access that show.  I guess she must have looked at my profile before she responded, because when she messaged back, she not only answered my question, but had a lot of questions for me!  She asked how long I’d been a Life Coach, and a little bit about my backstory.  I was excited to make a new connection so quickly, and we messaged back and forth for a bit.  Then she asked if we could talk on the phone.  What came next blew my mind.

My heart was pounding when I called her, I felt like something big was going to happen- and I was right!  She asked me if I would like to be a guest on her radio show!  I was honored and terrified!  This came out of nowhere!  But that wasn’t all.  There was more.  After talking for ten minutes about the process of the radio interview, she mentioned that she was collaborating with a few other professionals, getting a book deal together and offered me the opportunity to write a chapter with my story.  Me.  A published author.  My head was spinning!

Now, if you recall, this certification that I was completing is all about the Law of Attraction.  Deliberate focus and going with your gut on which direction you choose.  I was inspired to message her after reading about that guest I was interested in.  I had no resistance when she messaged back with questions, which led to a phone conversation, which led to, what for me, was the opportunity of a lifetime!  I accepted (again, honored and terrified) and wrote out my story.  After a few edits and some conference calls with the other authors, Dare to be Authentic- Finding Your Authentic Self was created!  A collection of stories about overcoming obstacles and turning them into positive outcomes!

I went on to do two book signings and bought a case of the Dare books with the intention of selling them.  I sold a few and donated the sales to charities close to my heart.  I found myself giving them away, as helpful tools for those who may benefit from reading the stories and realizing they are not alone.

We are not alone.  Being authentic is simple, but it isn’t always easy. 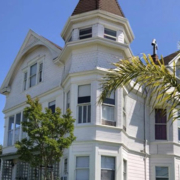 I have always loved big, old Victorian homes!  My hometown had one where the founding family had lived for generations.  One of my first jobs was as a babysitter in this very house.  I remember being fascinated with the “hidden staircase”, which was actually the servant’s staircase, back in the day.  I loved all those huge rooms, filled with antiques and old-fashioned light fixtures.  And of course, because of all the history, there was also a “spooky” element that made it even more exciting (I was 12).

Fast forward to 2017, Mount Shasta, CA.  I loved my little mountain town, but I was looking to move to the Bay Area, to be closer to my daughter and granddaughters.  After looking online for rentals for awhile, I soon realized that it was quite a bit more expensive than where I currently had been living.  Anything that was more in my price range didn’t appeal to me and I started to doubt whether or not this would work.  I talked to my daughter about it and she said sometimes the old Victorians downtown had apartments for rent.

What?!  I was immediately sparked!  There are old Victorians down there?  Yes, she explained, split up into apartments.  That was it for me.  I decided I was going to manifest such an apartment.  I was going to live in an old Victorian and that Christmas season, I was going to have my older granddaughter come over and we were going to do Christmas baking!  (Yes, when I have an idea, I run with it!)

That night, I wrote on a piece of paper: “Victorian apartment that I can afford, close to my daughter that allows pets.”  (I wanted to get a dog)  I put that piece of paper in my “manifesting box”, which is just a box that I chose to put my wishes and dreams in so the Universe can lend a hand.  Then I went to bed, knowing I had started the wheels in motion.

It was a few days later when I was looking on Craigslist and almost choked on my morning coffee.  It was an ad for a Victorian apartment, with GORGEOUS pictures, that was in my price range!  I immediately responded to the ad, and the next day, was in my car for the 4 hour drive with cash in hand, determined to make it mine!  I nearly cried when I was given the tour, it had a clawfoot tub!  The owner was business-like, but approachable.  He was a bit hesitant since he still had other applicants, but I did everything in my power to let him know that I would be the best choice.  (Having the first month’s rent and security deposit in cash didn’t hurt either!)  He took out a rental agreement and I signed on the dotted line.

I believed this with all my heart to be true before it happened, which allowed me to create the opportunity.  Then I followed through with confidence, just knowing that it was meant to be.