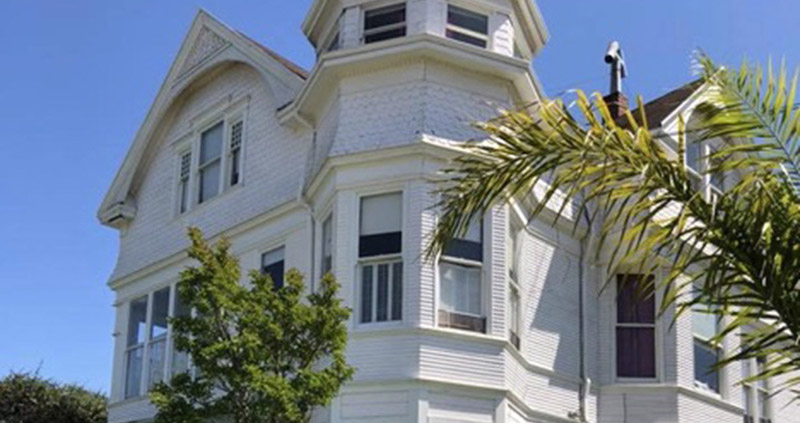 I have always loved big, old Victorian homes!  My hometown had one where the founding family had lived for generations.  One of my first jobs was as a babysitter in this very house.  I remember being fascinated with the “hidden staircase”, which was actually the servant’s staircase, back in the day.  I loved all those huge rooms, filled with antiques and old-fashioned light fixtures.  And of course, because of all the history, there was also a “spooky” element that made it even more exciting (I was 12).

Fast forward to 2017, Mount Shasta, CA.  I loved my little mountain town, but I was looking to move to the Bay Area, to be closer to my daughter and granddaughters.  After looking online for rentals for awhile, I soon realized that it was quite a bit more expensive than where I currently had been living.  Anything that was more in my price range didn’t appeal to me and I started to doubt whether or not this would work.  I talked to my daughter about it and she said sometimes the old Victorians downtown had apartments for rent.

What?!  I was immediately sparked!  There are old Victorians down there?  Yes, she explained, split up into apartments.  That was it for me.  I decided I was going to manifest such an apartment.  I was going to live in an old Victorian and that Christmas season, I was going to have my older granddaughter come over and we were going to do Christmas baking!  (Yes, when I have an idea, I run with it!)

That night, I wrote on a piece of paper: “Victorian apartment that I can afford, close to my daughter that allows pets.”  (I wanted to get a dog)  I put that piece of paper in my “manifesting box”, which is just a box that I chose to put my wishes and dreams in so the Universe can lend a hand.  Then I went to bed, knowing I had started the wheels in motion.

It was a few days later when I was looking on Craigslist and almost choked on my morning coffee.  It was an ad for a Victorian apartment, with GORGEOUS pictures, that was in my price range!  I immediately responded to the ad, and the next day, was in my car for the 4 hour drive with cash in hand, determined to make it mine!  I nearly cried when I was given the tour, it had a clawfoot tub!  The owner was business-like, but approachable.  He was a bit hesitant since he still had other applicants, but I did everything in my power to let him know that I would be the best choice.  (Having the first month’s rent and security deposit in cash didn’t hurt either!)  He took out a rental agreement and I signed on the dotted line.

I believed this with all my heart to be true before it happened, which allowed me to create the opportunity.  Then I followed through with confidence, just knowing that it was meant to be.

Want to join the discussion?
Feel free to contribute!

A Day in the Life of an Essential Worker

I “Dared” to be Authentic!
Scroll to top